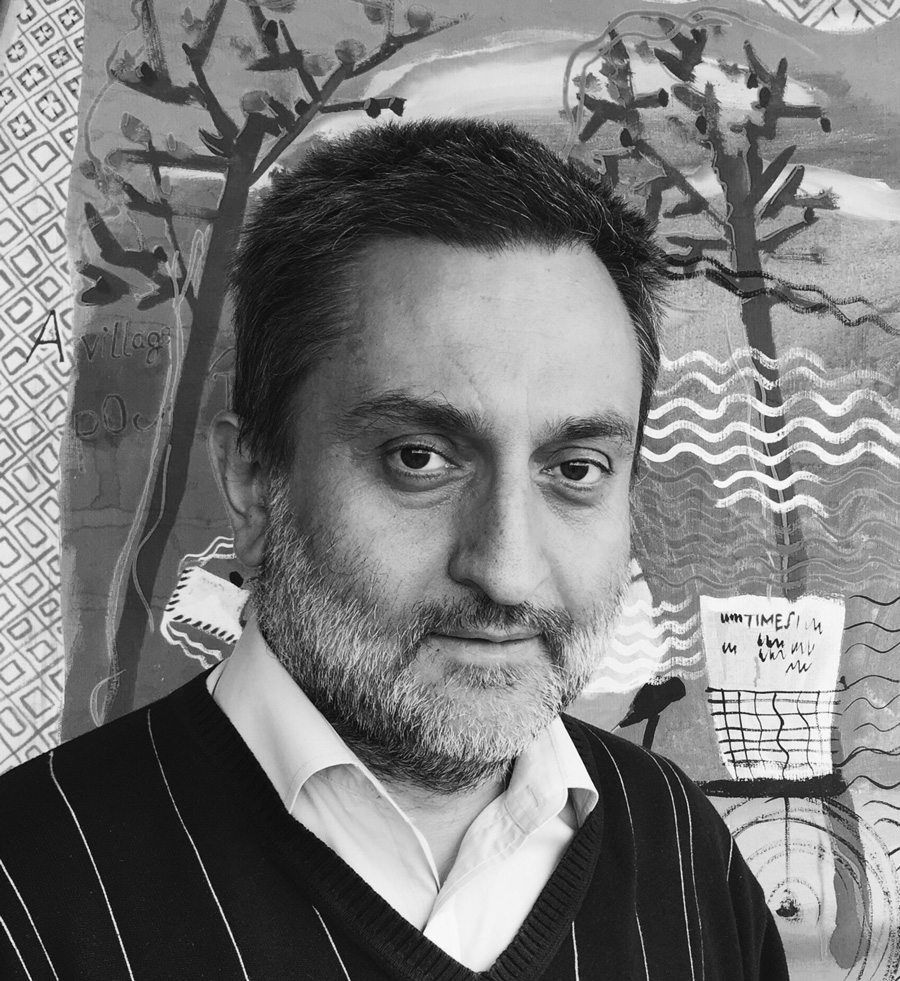 Lasha Kintsurashvili is a Georgian artist based in Tbilisi. Actively taking part in Tbilisi's art scene since 80s, Lasha started his career as an artist right after the collapse of Soviet Union.

While Georgia was reviving its cultural identity after post soviet times, Lasha was one of the first pioneers in art and iconography to explore his cultural roots and transform it into something new and modern. He is interested in everyday life and daily scenes from lives of Georgian people.

His art is characterized by humor, compassion, naive forms, rich use of color, accurate lines and frequent use of calligraphy as a decor.

Lasha Kintsurashvili was born on March 13th in 1968, Tbilisi (Georgia). In 1985 he graduated from Physical Mathematical School named after V. M. Komarov. At the same time he attended art specialized school of Georgia Ministry of Education, in the field of Fine Arts. Lasha continued his studies in the same year at Georgian Technical University, at the architectural department which he graduated in 1991. In 1989-90 he participated in restoration of mural paintings of medieval centuries in Svaneti (the highland region of Georgia), where he also painted copies of frescos and icons.

While working in Moscow he simultaneously took part in different exhibitions. In December, 1995 he exhibited his works at Moscow Painters Union Gallery,TverskayaYamskayastreet # 21. In January-February of 1996 his personal exhibition of paintings and icons took place at Exhibition Hall of Georgian Embassy in Russia. In January 2001 Lasha had a personal exhibition in a Gallery located on Arbat A-3.

At the end of January 2001 Lasha returned to Georgia and painted several churches in Tbilisi. In 2004 he had personal exhibition in Tbilisi Old Gallery. In February of 2014 Lasha’s work was exhibited at the Gallery of Georgian State Folklore center. The exhibition lasted for three weeks and showed almost every time period and each series that the artist created since 80s. His paintings are kept in private art collections all around the world: America, Europe, Russia, Japan, Georgia and South Korea. Lasha uses natural pigments (half precious stones, minerals and colors made of the ground) which give inner brightness to a painting.

As it has been mentioned above, he has taken part in many exhibitions, but he considers that his best exhibitions are his mural paintings which can always be visited by people.

Fantasy, play and experimentation meet a profound demonstration of traditional forms of knowledge in the paintings of Georgian artist-iconographer Lasha Kintsurashvili – one of the small Caucasus republic’s ,most sought-after masters. Fresh interpretations of classic subjects and striking juxtapositions of color, texture and shape characterize Kintsurashvili’s matchless style. The artist’s preferred medium is egg tempera, though he also paints with oil. His works are full of color, texture, motion, striking surfaces and hidden depth. They are upfront and bold, yet full of subtlety.
Kintsurashvili’s subjects range from landscapes, still-lives and portraits to images of village and urban life in his native Georgia, biblical parables and modernist abstract collages. Favorite themes include family, church and the spiritual life, Social relations between family members, generations, clergy and Christian faithfulness. The individuals and society are strikingly portrayed in works like “Small aquarium”, “Little girl in big city”, “Confession at Anchiskhati” and “+/- 50”. The quotidian finds fresh expression in others, like “Road to Samtredia”, “Washing of wheat in Ruisi”, “Hot summer in Ruisi””and “Grandfather prepares firewood”.
The artist’s genius lies in his compelling original attention to detail. Vivid, folk-inspired border graphics are a distinguishing feature of his sacred icons and paintings alike. He decorates many of his works with texts in striking calligraphy. These texts-words, phrases or entire poetic narratives help the viewer to interpret the images they accompany. Their function is at once aesthetic and heuristic, to appeal and to suggest, but never dictate meaning. While most of the artist’s textual ornaments are presented in Georgian language only, English and Russian interpretations are occasionally offered as well. A combination of languages/scripts is frequently used with playful intent, as in the still life “Chair”.
Kintsurashvili’s trademark play with perspective, dimension and form is exemplified in such works as “They are obscuring the metro’s motion”, a colorful, cartoon-like snapshot of traffic on an underground train, and “They’ve thrown the boy’s bag up the tree”, an enchanting depiction of a child high on a tree branch set in a distinctive geometric frame.
Works like “Prayer”, “Holy Friday” and “Kind Angel” reflect Kintsurashvili’s depth of understanding of, and extraordinary competence in Eastern Orthodox Christian iconography. Elongated, somber faces, wide, scrupulous eyes and modest postures evoke the other-worldly images characteristic of this ancient tradition.
Kintsurashvili’s compositions are never dull, but full of personality, imagination and surprise. They demonstrate an exceptional command of diverse visual styles, an untiring impulse for creative, sophisticated interpretation and an uncommon power of human observation.

List of the Churches, painted under Lasha Kintsurashvili’s leadership:

The bell tower of Sioni Cathedral

The Refectory of Georgian Patriarchate

The Residence Church of Akhalkalaki